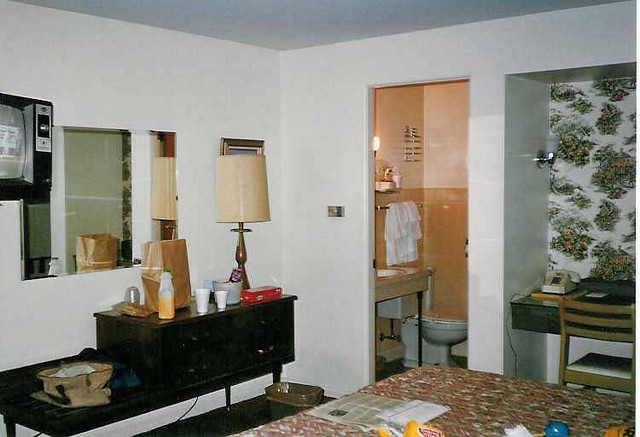 I went to Glenwood Springs when I traveled to the United States in 1985. As its name suggests, it is the hot springs. There is a large hot spring pool. It is located between Denver and Salt Lake City.

Why did I go to such a place? Well, because “Arukikata” (Japanese guidebook) described this place. I wanted to ski somewhere during this travel. It is a little bit strange course that I moved from New Orleans to Denver, and went to San Francisco via Salt Lake City. Because I wanted to go to Glenwood Springs. At that time, I couldn’t research on the Internet, I decided in such a manner.

The picture above is a room of the motel in Glenwood Springs. There was an old CRT TV, which displays baseball games. I remember I had a snack and a drink I bought at a nearby supermarket. I had a rest because I used many night buses during the travel.

Just after arriving in this town, I wonder how to go to the ski area, I almost gave it up and moved to Salt Lake City. But some kind guy took me to the ski area. I got another car to return. I wanted to give him something. Because “Arukikata” said that a five yen coin has a hole and it is rare, I gave him a Japanese five yen coin. But he said, “I know it ’cause I have relatives in Japan.”

It was a small ski resort, but it was impressed me that the women at the lifts are bright and cheerfully said hello.

The hot spring pool was very big. I was disappointed with the lukewarm water. I was surprised that there are people who read the book while soaking in the pool.