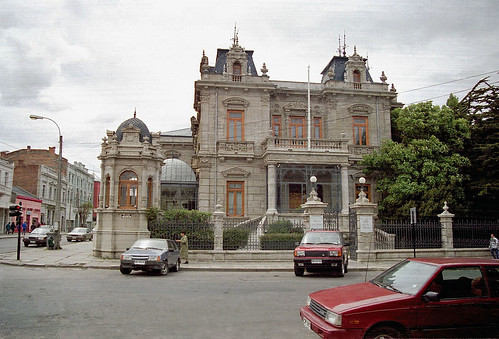 We didn't understand languages each other, but anyway we communicated. The owner was aged person, and very good guy. Hotel Natalino was a little expensive, but I didn't know what was a reasonable price at Puerto Natales.

The bus drove for Punta Arenas with few passengers. It's Xmas, so few buses were leaving from Puerto Natales. The bus ticket was CLP2500 for coming, and CLP3000 for going. I'm not sure it's due to Xmas price, different bus company, or grade of a bus.

At Punta Arenas, I stayed Hotel Monte Carlo. It's CLP 7900 for shared bath, without breakfast. I used room for twin. It's floors and stairways were made of wood, it's the same as Japanese traditional hotels 'Ryokan'.

I left my language in the room, had a cup of coffee at a restaurant on 1st floor, then went out to have a lunch. But town was empty, every shops and restaurants were closed. Finally I found a restaurant at a street few blocks away from the square. There were no restaurant open, local people came to there by car.

I had nothing to do. I checked travel agent for Penguin Colony Tour and Laundry on Lonely Planet, and then read a book at the hotel.

I took a hot-dog at a restaurant 'Kalipso' near the hotel. In Chile, completo means hot-dog. It's a very different from hot-dog in coffee shop such as Doutor in Japan. It served with diced tomato and avocado paste on a sausage. I stay there long time with Café con leche.

There two penguin colonies near Punta Arenas. "Arukikata" describes one of them, "Seno Otway". Another is Monumento Natural Los Pinguinos, which is located at Isla Magdalena.

Lonely Planet said Isla Magdalena was larger and more interesting. At Seno Otway, people see penguins from outside of rope, but at Isla Magdalena, people can go near the penguins. A person at Turismo Comapa which had Tour of Isla Magdalena said the same thing. So I applied the tour for Isla Magdalena. US$30. The tour leaves a port at 3 o'clock tomorrow.

Punta Arenas was a smaller town than I expected before. There were few small museums and not so many sights of seeing.

I had nothing to do again, so I went to Zona Franca. Zona Franca means Free Zone (Duty Free Zone). "Arukikata" said everything is sold here, surprising at its scale, but don't think shopping malls in US or Japan.

You don't need to go there, except if you have nothing to do. I couldn't find good souvenir at there. Lonely Planet said, "If your camera was stolen, you can get new one at here".