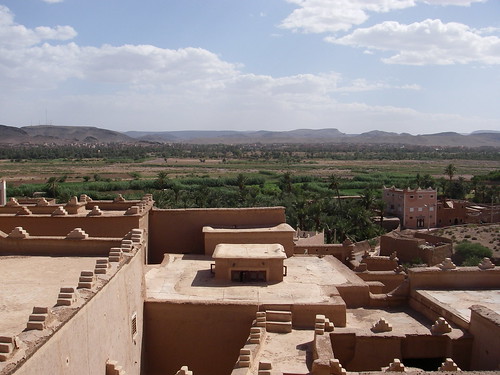 I woke up at 8 AM, checked out the hotel. At a coffee shop, I saw outside was becoming bright while taking breakfast. It was a coffee shop at Luxembourg, croissant and cafe took 10F. Breakfast at Cafe was expensive. I would have been to this kind of coffee shop for a breakfast.

I used the RER C line to go to Orly Airport. It’s great that there are two big airports so the near center of Paris. An RER ticket took 42F, I wonder how expensive, but it was first class. Umm.

A plane of Royal Air Morocco decreased its altitude. The plane passed snowed Atlas, and I saw a desert area. I found a river without water. I guess it flows with rarely fallen rain. I wondered where was the airport because I couldn’t see from the plane flew very low altitude. Suddenly runway appeared and the plane landed there.

This airport looked great. In a desert, there is a runway and a very small building only. I understood that the color of the building was the same as the dessert, so I couldn’t find the airport from the plane.

At passport control, I was asked the name of the hotel which I would stay. I answered “Atlas” which is the first hotel on a list on a guidebook. The man said to another man “Hey, hey, Atlas!” or something. I couldn’t understand their language. Another man said to me “Konbanwa” (good evening in Japanese). So I smiled and said “Konbanwa”. “Atlas” was the cheapest hotel in the guidebook.

First, I have to exchange money. There was only one person to handle at a Bank. There was a long queue. Sometimes he said to the customer “Just moment, no money, I get money soon”, so it took a long time. I could exchange Japanese Yen with Moroccan dirham. 100 Yen made 7.029 DH.

I went out of the airport building. There was a small open space you can find a similar one at a front of a small station in a country area. I didn’t know how to go to a town, how far to the town, etc. I found a microbus and asked a driver whether I could get on it. But it was a charter bus for a private tour. I had to take a taxi.

I tried to find a taxi. At the bank inside the airport building, some French lady helped me in English, because a man from Bank asked me something in French. The lady got a taxi and let me go with her. It’s 30DH to the town. I paid 20DH.

I got a room at Atlas hotel. 31DH. It was a two-story building and I could go out a roof top. On a rooftop, someone was drying clothes on a rope. I saw the sun was setting. The setting sun shined a town, very beautiful.

I was walking around the town. Young guys having teas called me, and I chatted with them for a while. They spoke English. They learned English at a school, they said. They were students and it’s a holiday of ten days. I was not sure it’s true or not. They said few Japanese came here. They were not so bad guys.

I asked them where a Hamam (Public steam bath) was. One of them said he would take me to the Hamam. I went back to a hotel and took a soap, shampoo, and towel. We went to the Hamam, and he asked me to pay for him. I paid 10DH, it’s OK to pay for a guide. After a long time, I washed my body well and relaxed. After that he wanted me to have diner with him. I guessed he wanted me to pay for him, but anyhow it’s the first day in Morocco, I went with him to learn. We went to a very small restaurant where no French came, and we had a chicken which was 15DH for each. Eventually, it’s on me.

I realized later, it’s a very expensive price that 10DH for Hamam.

I went out to the rooftop to watch the stars. While walking around, wow! surprised! I found a man who stays in a small room like a storeroom. There is a room on the rooftop. He called me to come in. He was Moroccan. He gave me a glass of wine. He came here from Marrakesh. What was he doing? He seemed to be lonely. He talked to me in French, but I didn’t understand. I would have been able to speak French.

I realized that it’s normal that a hotel had a room on a rooftop after staying some days in Morocco.

I went to Taourirt Kasbah located near here on foot. Taourirt is the name of the person who lived there, and Kasbah is like a fortress. It’s a sightseeing spot, so French families were coming here on foot from near hotels. I paid 5DH and entered in. It’s not so interesting without guidance.

At an exit, a man asked me if Japanese I was. He wanted me to set a date and time for his calculator. I asked him where he got it, and he said he was given it from some Japanese engineer who had worked for an organization related to UNESCO. 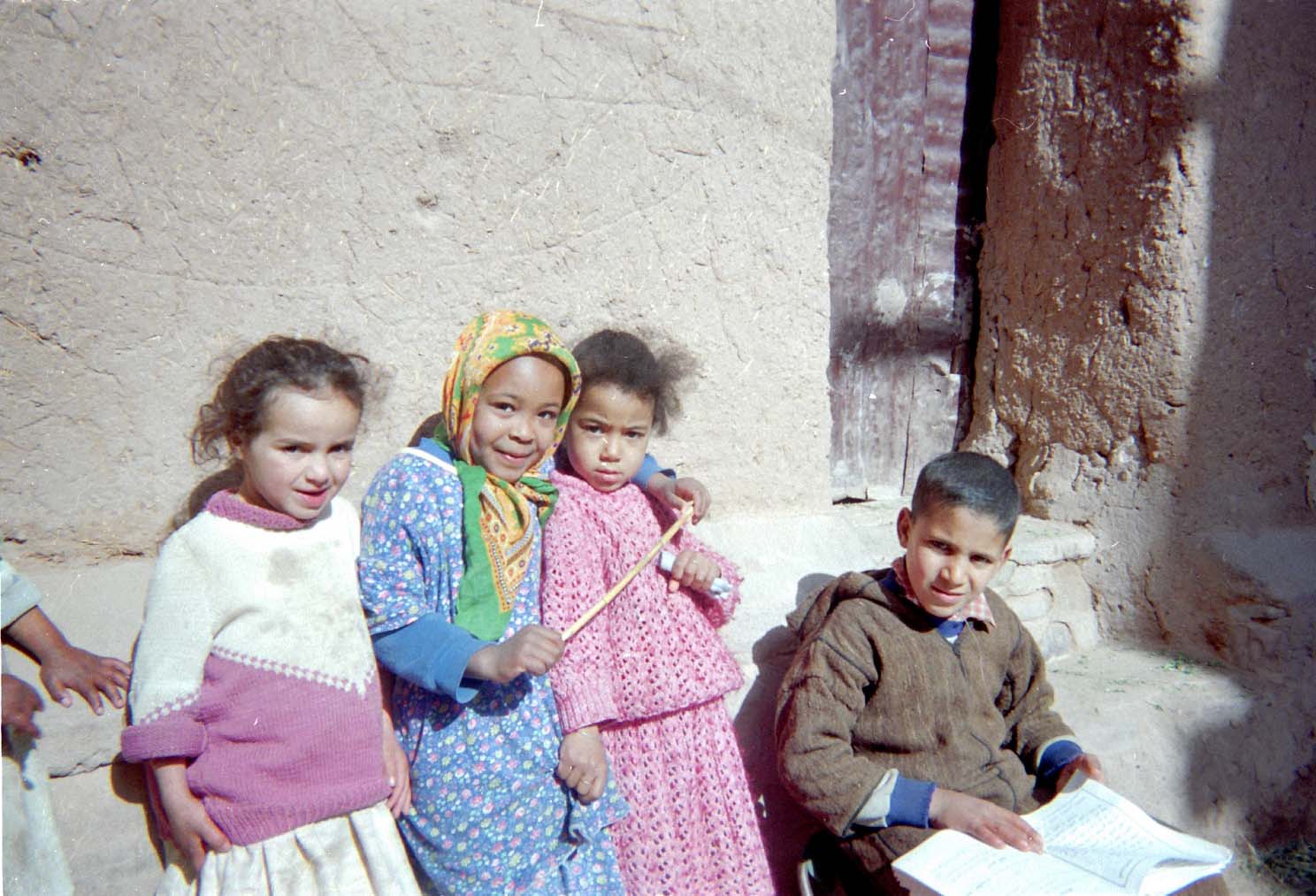 After leaving Taourirt Kasbah, I walked around there, I went through a narrow path, there was a small village. I found an open space and water supply. Children came here to fill their small tanks with water. Sometimes I passed by French tourists. Children were very cheerful and said to me “Ça va?”, “Japonais?”, etc. Ah, I could have spoken French. I said to the children “Photo?” and took their picture. 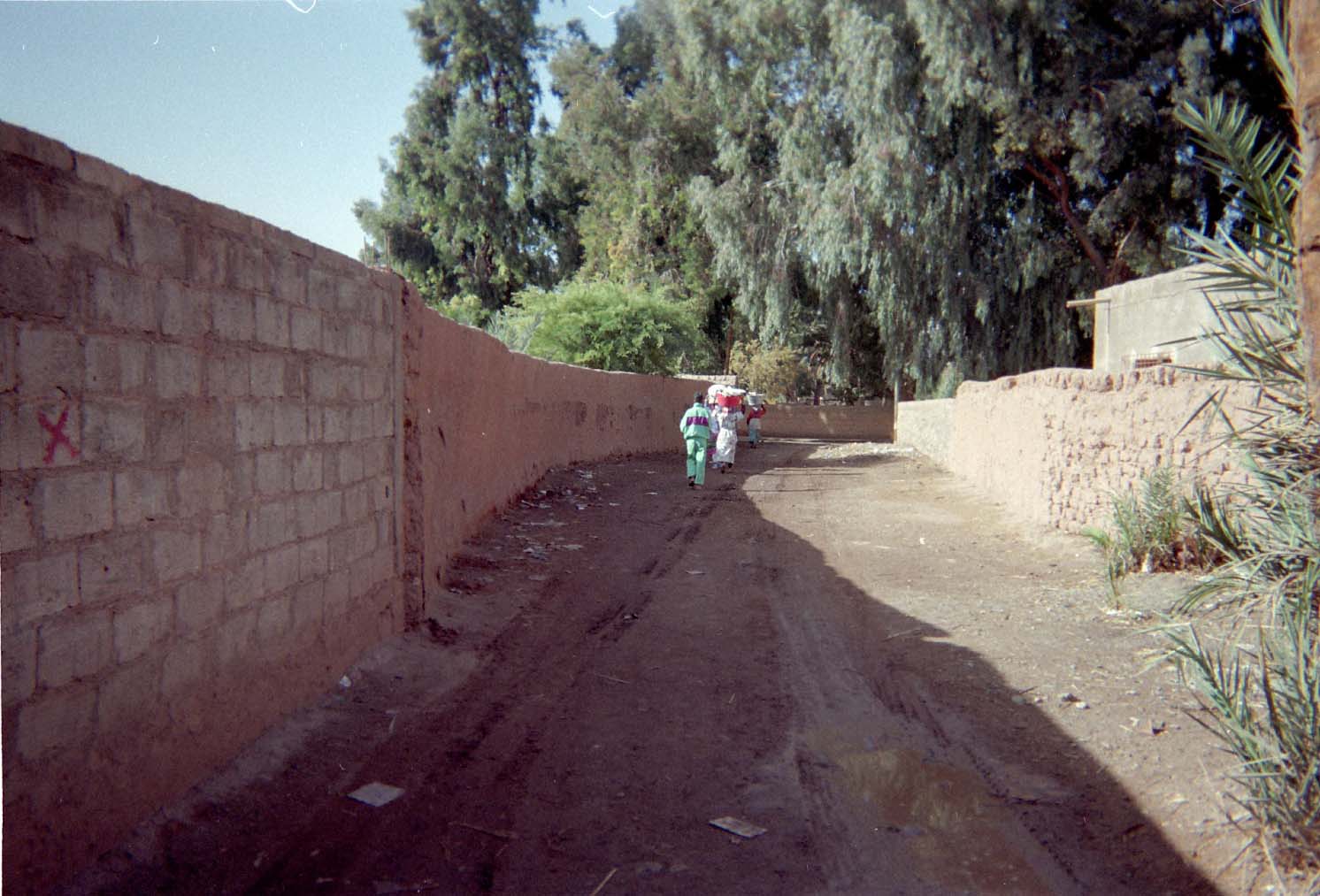 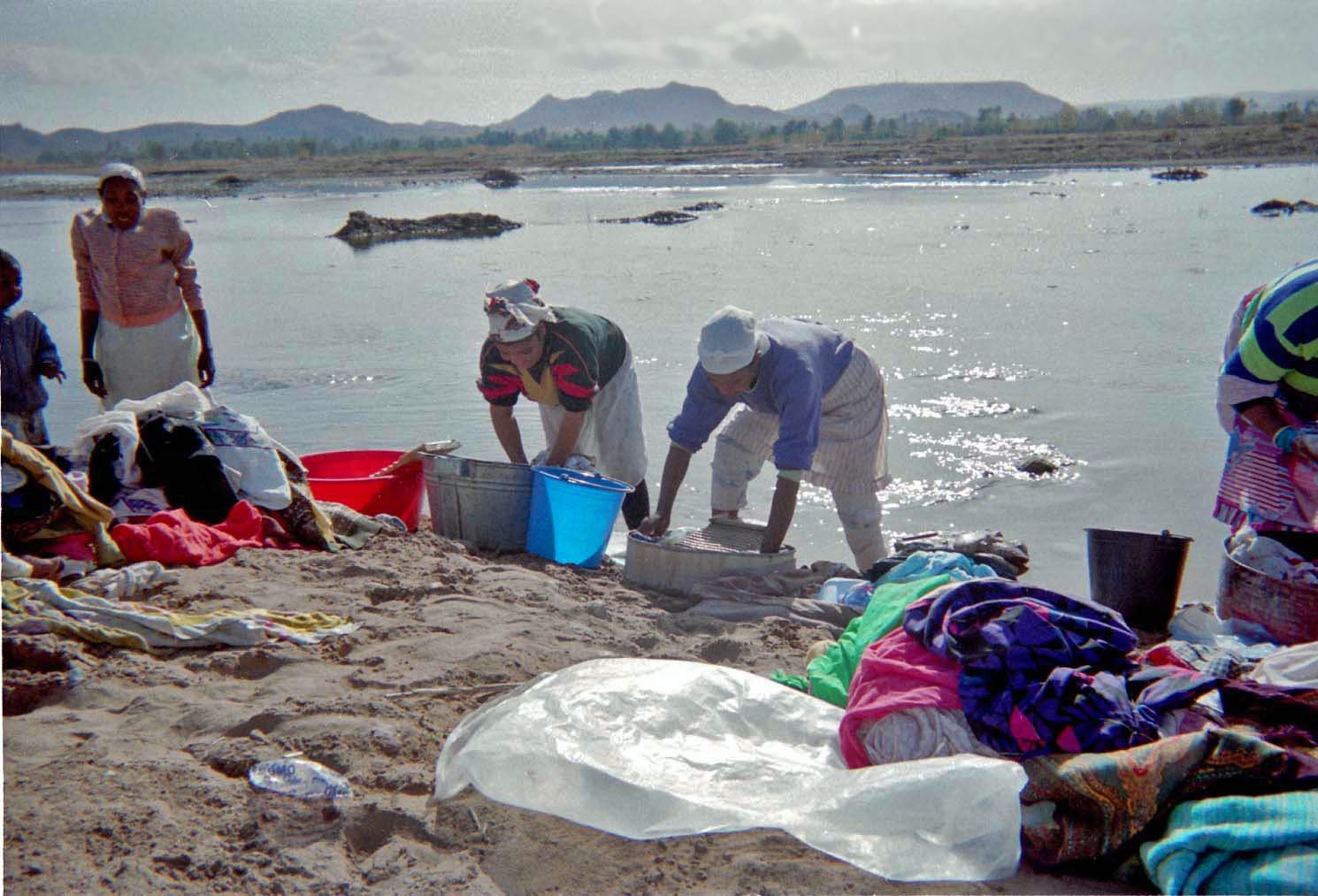 When I was walking toward the center of the town, I met women who had clothes to be washed and a washboard in their washtub. They were walking somewhere. I guessed they went to wash clothes because it’s a fine Sunday. I followed them.

They went to a river near the town. I was a little bit away from them. They asked me, “Ça va?”, and I answered, “Oui, ça va bien”. They talked to me about something in French, but I didn’t understand it. I could have spoken French. Anyway, they asked me, “Spanish?”, so I said, “Japanese”, then they asked, “Tourist?”, so I said, “Yes, tourist”. I wanted to take a picture of them, I got out my camera from a bag, and asked, “photo?”. They said “OK, but send us a picture from Japan”. I got their address and took a picture of washing clothes at a river. They were very nice.

In the afternoon, I met six Japanese girls near a bus terminal. I was surprised. But in this small village, some Moroccan talked to me, “Konichiwa”, “Konbanwa”. It meant many Japanese had come here. 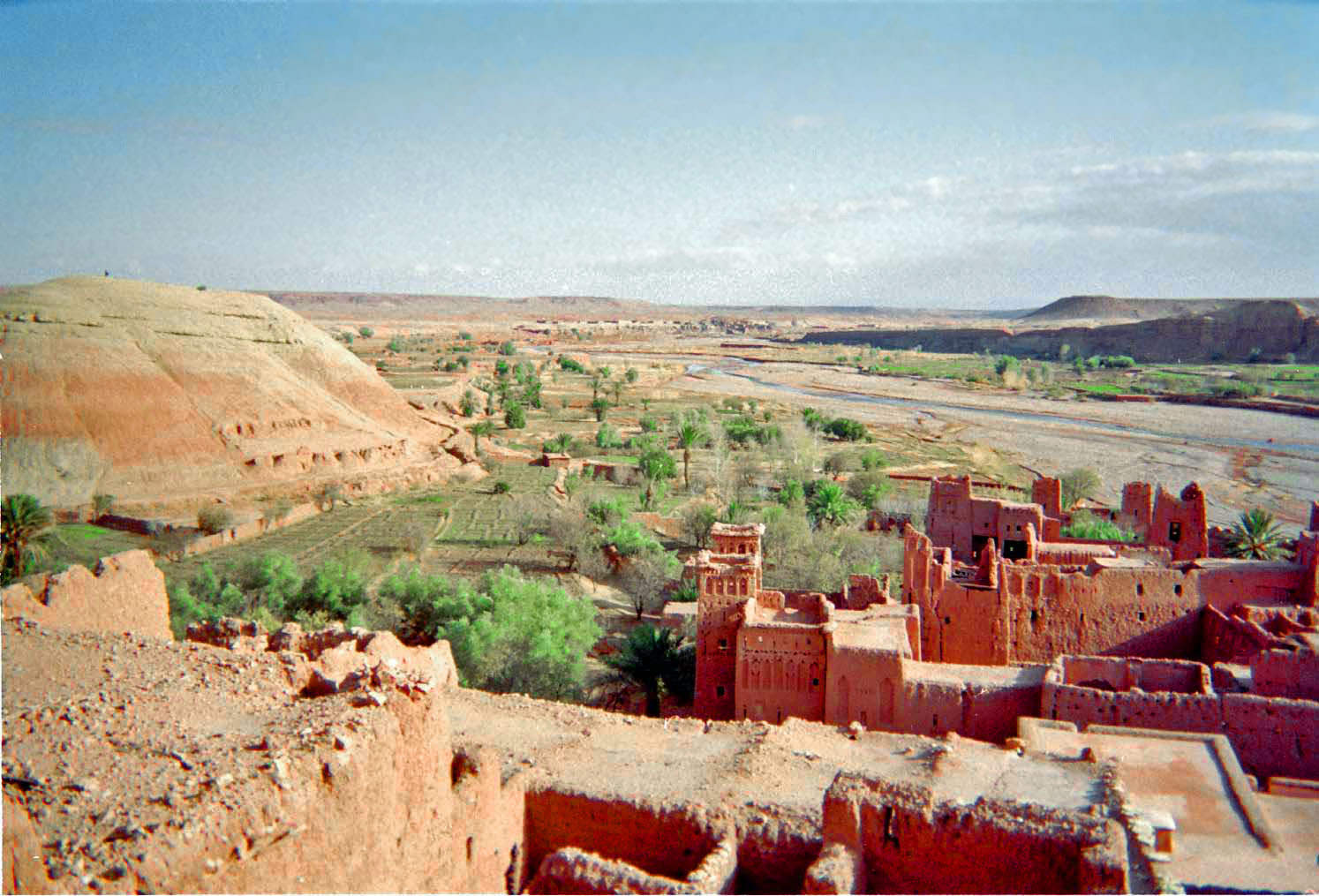 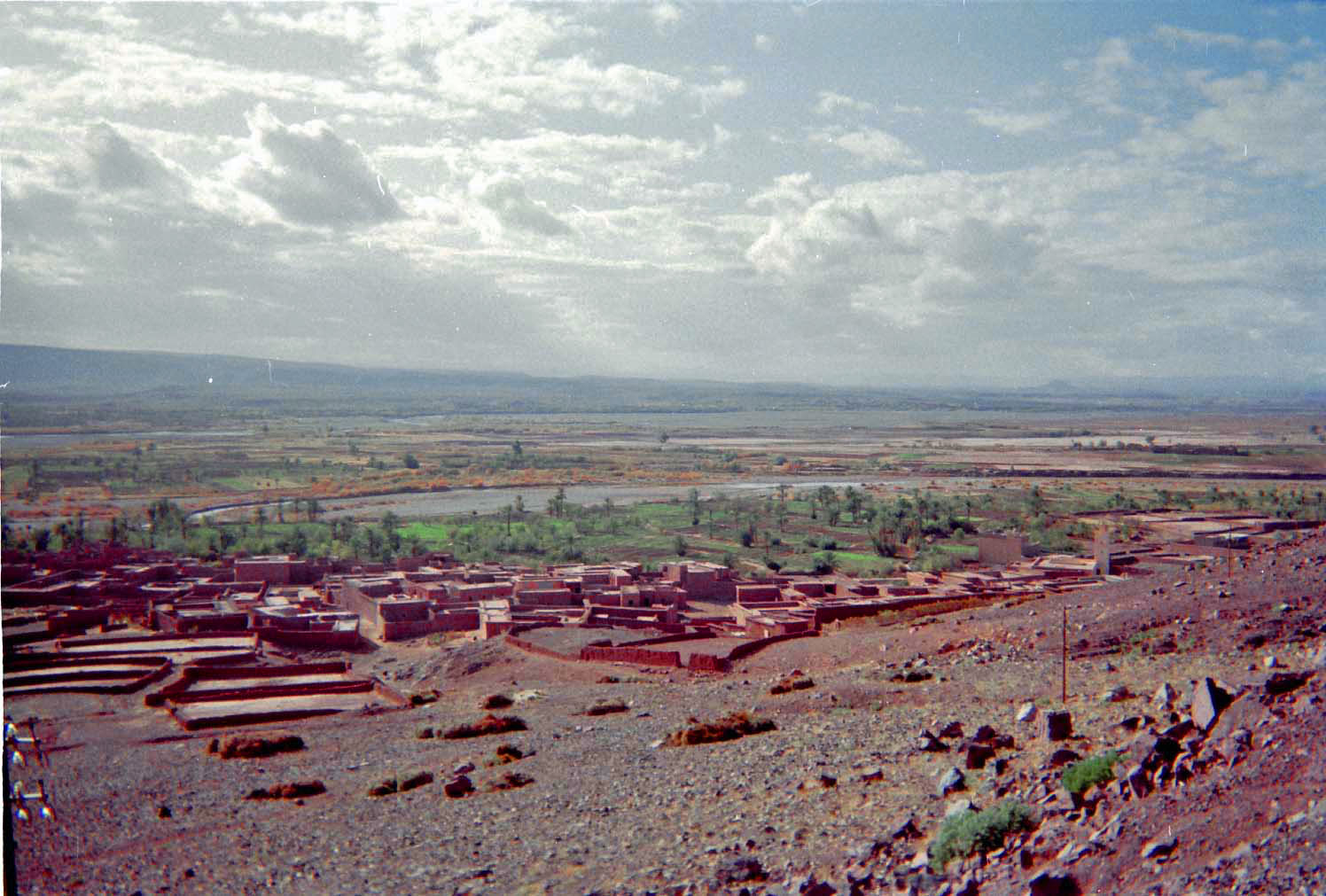 In the afternoon, I went to Aït Benhaddou, which was a beautiful village.

A small stream flowed, A green was beautiful, It seemed to be good in Summer. Aït Benhaddou is 30km far from Ouarzazate. I had to take a taxi. I talked to a taxi driver that I paid 200DH for a round trip and staying there 45 minutes. It’s very expensive, but a guidebook said there was a group tour of 140DH. I accepted 200DH for a tour by myself.