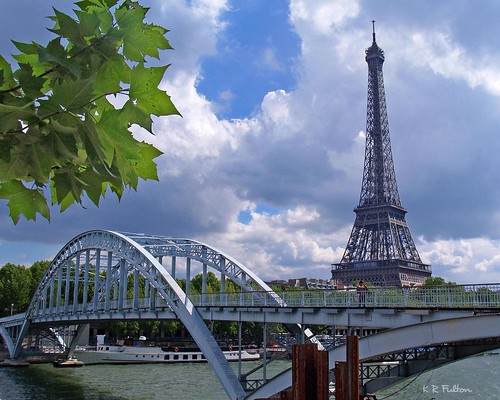 I don’t remember when I decided to go to Morocco. Anyway, I wanted to go to a desert in Morocco.

No direct flight from Japan to Morocco, so I tried to buy a ticket from Iberia Airlines, which has the option to add a ticket from Madrid to Casablanca for an additional fee of ten thousand yen. But I couldn’t get it. Eventually, I decided to go to Paris by Air France and buy a ticket to Morocco in Paris. It’s December 6, 1992.

In a plane(B747-400) of Air France, a monitor displayed a tracking of a flight. On a map of the monitor, you see an icon of a plane, a flight route, and a current position. The map described names of major cities and not-major cities with a small circle. I guessed the circle meant something related to a plane leading(*). After taking off at Narita, the circle appeared at Kawasaki and moved to Niigata, Asahikawa, Khabarovsk. The monitor also displayed the speed of the plane, a distance to a destination, a time from a taking off, an altitude, and an outside temperature in English, French, and Japanese. When the plane flew above Siberia, It’s -65 degrees Celsius. It was very cold outside.

It’s interesting while preparing for a landing. A speed was slowed down at 300km/h, an altitude was becoming lower and lower. The plane passed the north side of Charles de Gaulle International Airport and turned for landing. A distance to a destination became shorter and longer, then shorter again.

I arrived at Paris at five-thirty in the evening, got a room near the Luxembourg station underground. After a light supper of a hamburger, I took a walk around there and looked for a travel agency. I found “Nouvelles Frontieres”, it still opened, so I asked about a ticket to Morocco. They had a ticket to Morocco only Saturday and Sunday flights. Return flight also on Saturday and Sunday only. My return flight was at night on 9, January, Saturday. Hmm, I couldn’t decide.

(2006/5/3) It was first time to see a function of display current position on a map in a plane (B747-400).
(2006/5/3) Nouvelles Frontieres – Vos vacances aux meilleurs prix
For example, a ticket from Paris to Marrakesh, €184.
You can find many budget class hotels in an area called ‘Quartier Latin’ near Luxembourg station.

I woke up at five o’clock in the morning due to jet lag. I spent time reading a book until eight o’clock. At eight, the outside was still dark. But it’s a waste of time, I went out. I had to get a ticket to Morocco because I said to my colleagues that I would go to Morocco.

Walking in the town, still dark, with few people, I waited until 10 o’clock when travel agencies opened. I went to a different agency I visited last night. I wanted to leave Paris on December 25, but a flight on that day to Marrakesh was full. They said a flight to Casablanca was not full, but it took 3,000 Franc. It’s normal because it’s Christmas & New Year they said. After all, at Nouvelles Frontieres, I bought a ticket to Ouarzazate on Saturday, it took 2042 Franc for a round trip. They had also a ticket to Marrakesh, but it only fly on Sunday. Return flight from Ouarzazate was also on Saturday only and it was on January 9, 1993. My return flight from Paris to Japan was at 23 PM on January 9. I think it’s OK.

Anyway, I got away to Morocco. When I went out of the agency, the sun was coming, many tourists were walking in a street. I wondered where they had been until that time.

I felt good. I go back to the hotel and I told them I would stay until Saturday morning. Then I went sightseeing. First, I went FNAC book store at Forum des Halles to buy a map of Morocco. On the way there, I visited Cathédrale Notre-Dame de Paris. There was a cheerful atmosphere by a lot of tourists.

In the Cathedral, a chorus group was singing. I enjoyed a pipe organ sound and very beautiful voices. If without flush from tourists’ camera, it would be better. At the back of the Cathedral, tourists’ buses parked, Japanese young girls, talking and taking a photo of each other. It seemed to be joyful.

Then I searched the famous Ice cream shop near here. Why do I want to go to such a place? Because it’s my second time visiting Paris and I had a lot of time… I found a very long queue, Wow!, it’s an Ice cream shop I was looking for. It’s not tourists but local people made a long queue. Ice cream for Christmas!

After visiting Modern Art Museum at Centre Pompidou, I went outside and found many people together. It was a street performance. One man is tied by a chain. He was doing unchain performance. While he doing, another man did other performances for a laugh. I was laughing though I couldn’t understand what he said. Inside the people’s circle, children were sitting and enjoyed it much. One performer was slim, tied his long hair. Another wore big size short pants only, impressive looks, busy to do various performances.

I woke up at 8:30. Today, Let’s go to Musée du Louvre! I thought about how to spend this afternoon, but I need a lot of time to see Louvre until evening.

On the way to the hotel, I saw a great performance at a platform of the subway station. When I went down to the platform, I hear the sound of drums. It was a drum sound from Black Africa. It’s a real one. Africans were singing with the beat of drums. It was a world of Africa. A strong rhythm beat my body. It’s great.

They were straddling four big drums and beating them. Then someone opened a bottle of champagne and passed around it. Many Africans came around and sang together. Someone began to sing, and one of the drums beat a rhythm. Other drums followed the rhythm with good timing. I guess this was their Christmas party, who couldn’t go back home.

After a while, the police came to stop them.

one of the policemen was African.

“Hey, you are African, you must understand us”
“Hahaha, I have to do this”

I imagined the conversation above.

Most of the shops and restaurants were closed. McDonald’s was closed. Museums were closed. So, the only thing to do for tourists was walk on l’Avenue des Champs-Élysées.

I also woke around here and there, but I felt it’s stupid, then I went back to the hotel. I watched TV in a Lobby.

Musee d’Orsay
We use cookies on our website to give you the most relevant experience by remembering your preferences and repeat visits. By clicking “Accept”, you consent to the use of ALL the cookies.
Do not sell my personal information.
Cookie SettingsAccept
Manage consent