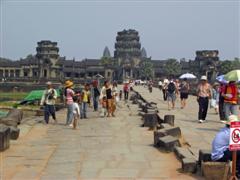 At the afternoon on the first day, I visited there first. Among Angkor ruins, only Angkor Wat is oriented to the west. So, it is better to visit afternoon.

My first impression at the gate was its great size. From the gate, I could see the west tower and the tip of central tower. It seemed to be far away. I was excited with this view. I across a long bridge of the pond around the temple, and entered into the next gate. I found a long road to the outer wall. At this point, I could see the central tower and whole figure of the temple which I had seen only TV and pictures.

If you see the all reliefs on the outer gallery, the sun would set during it. I saw the reliefs along the wall for right direction, but eventually I didn't see the reliafs on the wall of left half. It would be helpful if you have a guide to know important reliafs and their explanations.