Story get on the wrong train in Thailand 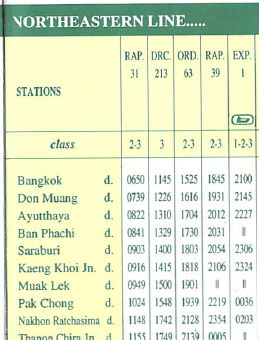 The train does not come even after 8:22. I didn't worry because it's usual thing. Eventually it came at 8:40. I thought it was the train towards Ubon Ratchathani, which was late.

But it was the train bound for Chiang Mai which should leave Ayutthaya at 8:09.

I had to make sure to ask the attendant, but it's natural to regard the train was going for Ubon Ratchathani in that situation.

Anyway, I had been aware a mistake after finding a seat on a train and being calm down. I didn't remember why, or I might have anxiety, I told I went to Pak Chong. Then people around me abuzz.

I was taking the third grade seat, and no tourists around me, but only local people. Only two, three persons in the car speak English. People around me talking and Thai who speak English came out, then I explained.

Thai people helped strange foreigner on a train were very kind and thankful.