replica of the mummy of a child

Santiago is a city of museum, they said. I decided to go one of the museums. I chose Natural History Museum. "Replica of the mummy of a child 500 years ago which was discovered in the highlands of 5000m" and "the oldest rock in the world of one million years ago" seems to be the main attraction.

The museum is located in the park of Quinta Normal. The park is easy to go by about 20 minutes walking from the subway station. I can't help saying, "What a hot it is! It's too hot...", while walking, but it's not so long distance to arrive. After I entered the museum, immediately I realized that I had a difficulty. All Descriptions are written in Spanish. So I have to look at exhibitions with relying on the imagination from a few lines of commentary of "Arukikata" guide book. In fact, I hadn't known the museum had the oldest rock in the world, and on the way of looking, once I knew it by the book, I start to look from the first one again, because I might missed the oldest rock. The most shocked one is that it turned out to be "Only 20 peaces of Rongorongo of Easter Island are remained, and this museum has three of them", after visiting the museum. I missed it, of course. It should be written on the page about Santiago Museums, should not be written on the page of The Easter Island.                         *** I was wandering around the Centro afternoon. There are a lot of strange coffee shops in this area. While it is difficult to have a good coffee, but every coffee shops here serves good one, and the price here is cheap, 340 pesos. I went several coffee shops. How strange are the coffee shops here? Staffs of coffee shops are young beautiful girls and they are wearing a mini skirt, or body conscious costume. In some shops, the girls are wearing T-backs. Large coffee shops such as Cafe Haiti, or Cafe Caribe are located along the main street, and the costume is not so radical. I found some radical costume shops in the mall. Most of customers are white-collar workers wearing a suit. They just drink a coffee. I found a fresh juice shop. But I can't understand the description of the menu at all. I can't imagine a name of fruit which is written in Spanish. Only one I know is Naranha. Then, I ordered the Cherimoya juice. It's so hot anyway, I just drink something cold. I would feel I do not want to go anywhere. Anyway, I went to the hill of Santa Lucia. I would not get tired, because the height of the hill may be not so high. There is an elevator. 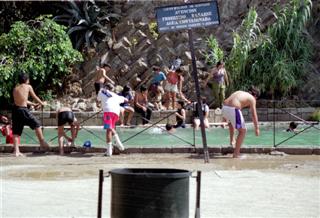 Fountain of Santa Lucia Hill
Yes, there was an elevator, but it was not running, nobody was here. So, I climbed the stairs. There is a fountain in the plaza of the summit, the children were jumping into it. Ice cream was sold near there, It was very cheap for children. Nice views from the top but a view of the mountains in the distance was faintly visible, it's fine day but it is dirty smog. It's a very different from pictures of postcard. On the way to back, the elevator was moving. An operator of the elevator must have been taking a long lunch break I'm sure.
Site about Rongorongo.
Rongorongo
The Rongorongo of Easter Island
How many Rongorongo existing in the world?
According to the site above and Wikipedia, there are 21 (or 20) written on Tablet, and five written on other.