I arrived in Santiago on the red-eye flight. I left “Arukikata” (Japanese Guidebook) Peru edition and “Exective Orders” Vol.1 by Tom Clancy at the inn yesterday. Regarding Vol.2, I left it at Monte Carlo Hotel in Punta Arenas. My first impression when I landed at the airport Arturo Merino Benitez in the early morning, was it is cold. Why is it so cold? El Nino?

Make a phone call to Hotel Tokyo at the airport. This hotel is listed under the name Hotel Japon in “Arukikata”. Japanese and his Chilean wife, who speaks Japanese well, run the hotel. I talked her on the phone, and booked successfully in Japanese, then I immediately headed to the city. I got out of a terminal building and found ‘Tour Express’ bus stopped, then took it. A ticket might be sold somewhere, but it seemed that I could buy in the bus. I showed the address of the hotel to bus staff and told that I wanted to go there. Nobody cling to me when I got out the terminal building, and there is a nice airport bus, it’s a great difference from Peru. The town is clean and safe, it has a good transportation, things are neat, it is easy to travel in Chile. But it doesn’t have an Asian bustle, there are no cheating guy, phony bastard. Some traveller who love Asia may miss them. I think, rather than watch the lives of people, it is good to see the great nature. The bus came close to Los Eroesu station. The bus staff kindly told me "The street you’re going is other side of this road. the bus stop at the station, you will go back a little down this road”, with pointing out the window. I became to love the country of Chile, because of his experience on the first day. I rang the bell of Hotel Tokyo, old woman came out. I had to imagine a more young, I was a little surprised. Her name is Monica, she married a younger Japanese, and have lived in Japan for 10 years. She said she was going to forget so fast because she didn’t speak Japanese after moving to Chile. Her husband has been working in the city office in Japan. He will retire in three years and come to Chile after that, and she is waiting for it. Until the room I stay is ready, she let me show the video of Japanese TV in the living room. She has many old Japanese potteries and dolls in the dining room and the living room. She bought them from Japanese who lives in Santiago. Japanese immigrants auction antiques brought from Japan when they wanted money. She has a Japanese old gun, and asked me how much it is. I replied it’s a million yen. She bought it at about 300,000 yen. She said it was very cheap. 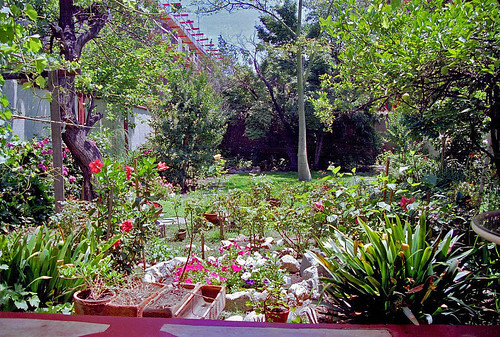 The room became ready and I carried the luggage. it’s US $ 35 room with a private shower. It is a little expensive. I can enjoy the chirping of birds and the courtyard with beautiful flower. I recommend for those who like that sort of thing. I asked her if there is a place to wash my cloths, then she said I should go to a laundry shop. A cleaning is cheap because it is fixed price, 2,000 peso per one cleaning even though how many cloths I take to the shop. I got taught mystery spell, “lavado y secado”, it means “washing and drying”. “Hmm, lavado y secado, lavado y secado, …” I decided to the town center first, then go to a laundry shop. First, I went to an AMEX office. Many dirty travelers who are odd with a fine office have come. When I went to the AMEX office, they made a queue. Why they came here? Because at this AMEX office, travellers can exchange their AMEX travellers’ check with US dollar. If you want Chilean peso, the rate from US dollar is good. It is very grateful that we can get US dollar cash in the land of South America. It has no meaning of traveler’s checks if I exchange them with a large amounts of cash, but I will use more and more US dollar while I go around the south of Chile, so I cashed US $ 500. As the Sun rose higher, it became more and more hot. Street at Centro that the vehicles are shut out for pedestrian is very crowded. It seems to have come to the Christmas shopping. I found many people eat a mountain of ice cream while walking. I also tried. There are various Ice cream at the shop what I do not know which is which. I choose Chirimoya ice cream. It is super-heaping. It seems that everyone loves ice cream. I decided to take a lunch at the Central Market. I was looking forward it. When I went backside of the market, I found some restaurants. Men and women at there said to me, “Uni!, Sakana!” (“Sea urchin!, Fish!”) . I entered a small restaurant, and looked for something from the list on the wall. “Paila Marina”, it seemed good, I decided to ask this. Thing that came out is what should be called seafood soup, yeah, it was very delicious. There is also something similar called “Sopa Mariscos”, I did not know where how different. It was 1900 pesos. I found a sea urchin, but it is 3000 pesos, look a bit expensive. I found that it pretty expensive at about 3000 pesos , or 4000 pesos at shops elsewhere. I left the central market, then go to a great church to see inside and Lan Chile office to reconfirm my air ticket. When I go back to the hotel, I found that I forgot the mystery spell. Hmm, it may OK without the spell. I went back to the hotel and I was looking for a laundry shop Monica said to me. It is easy to find, there is a price list at the entrance, and it says “Lavado ... 1000, Secado ... 1000”, I finally remembered the spell. "Lavado y secado, por favor" The spell was right. A man at shop accepted. I forgot how did the conversation, I found to be coming to take Siete (7:00) anyway. I back to the hotel and slept. It’s 10 pm when I woke up. I did not go to take my cloths eventually. I also didn’t have a dinner.
WEB site referred when I traveled Chile
チリもつもれば - 駐在者がおくるチリの生活情報
Comment of Japanese tourist who stayed at Hotel Tokyo
From the spring of 1997 to the spring of 1998, there was the biggest El Nino in 20 century. But in December, it doesn't effect to a climate of Chile. At least it doesn't make it become cold. At Santiago, it was chilly in the morning, but very hot around the noon like a summer of Tokyo.
"Lavado y Secado" means "washing and drying"
Sopa Mariscos means "Seafood Soup". For "Paila Marina", see Wikipedia