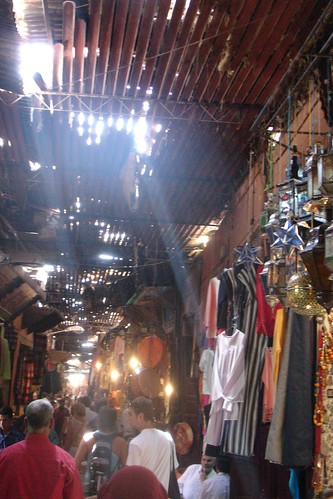 I have few things to do today. Waked up later, I went to a bank to excahnge money, bought bus ticket to Marrakesh, and tried to reconfirm air ticket at Royal Morocco Air, but I was said I didn't had to reconfirm. Finally, bought food for bus trip. I went to Medina because I didn't want to go elsewhere. I had a Kefta(meat balls) sandwich, which was 14DH, then stay long time at cafe. I'd but new sweater but gave it up because it's too expensive. I found key chains made of bull horn chips, which looks good on souvenirs. But I didn't buy it because it's 10DH and felt expensive. Eventually I bought 500g of peanuts, 1Kg dates, and water, then I went back to the hotel. By the way, the Medina of Fez is one the most complex medina. It's true everybody must be lost. Yesterday, I tried to back to the hotel from inside the Medina. I was walking to the direction the point I entered to the Medina, but while I was getting away from guides, I got lost. I got outside of Medina, but it was very different place. So, I tried to go Bou Jeloud Gate once more with referring a direction of the sun. So, it is not a bad idea to hire a guide in order not to get lost. At some night, when I got out the hotel to go to restaurant, a guy came to me, and said he could show me restaurants. I didn't ask him to do so, he kept going with me. Most of restaurants in New City of Fez are expensive. A restaurant I went yesterday, set menu was 42DH and Couscous was 34DH. I tried some restaurants which he showed me, but I turned down them. I guessed it's expensive because some fee for a guide was added to the price. Eventually, the guide showed me cheap restaurant located back side. It looked not so good, but the guide didn't leave me, then I decided to have something to eat here. I had two dishes, it was 30DH first, soon discounted to 25DH. Wow, it's expensive. When I got out of the restaurant, the guide said, "I made him discount from 30DH to 25DH". That dishes looked around 10DH! He said,"I showed you the restaurant, and the price became cheap, so give me 5DH". What? I said "I can't understand what you say", then I ignored him. On the way to the hotel, I tired to buy oranges at fruits shop. Scaling three big oranges, it was 1Kg and 200g. I ask how much, then he said 10DH. What? Incredible! I walked away. The guides came to me and said, "6DH, 6DH is OK". It's too late. The fruits shop lost money because of the guide. Why he bothered me to buy something! I guessed the fruits shop and restaurant were said from the guide, "give me something from the payments of this Japanese".

I woke up at 5:45 in the morning, went to the terminal to get the bus leaving at 6:30. I had CTM's bus for Marrakesh, which is expensive than private company, and quality is high. At the terminal, luggages were weighed. Although private bus company claims payment for luggages without weighing, CTM measures weight of luggages and wrote it on the back of the ticket, then you should pay for it at the counter and get voucher and tags for luggages. The voucher was necessary to get your luggage when you get off the bus. The seat was reserved each passenger. The bus left at 7:00. Goodbye Fez. I did not like here so much. I can't believe here is number one in popularity. Maybe I should take the accommodation in Medina, I might not walk Medina so much. In the bus, the guy next to me was professor of French literature at the University in Beni Mellal, which is a town between Fez and Marrakesh. I was surprised he was university professor. First intelligent person I met in morocco. He was calm and good guy. He asked to me, "I watched TV program which said Japanese didn't like holidays and like to work, is it true?". Oh, C'mon. "No, everybody likes holidays", I answered. He was Berber, and he spoke Berber, two Arab (he said classic-arab), and French very well, and English little. According to him, originally Berbers had lived in Morocco, then Arabs came to here with Muslim. "Arukikata" also describes a history of Maghreb, which says Berbers had lived here and dominated from Roman, Ottoman, and Spanish. So it is not pure Arabic but felt European tastes here. The professor said, "Berber is more popular than Arabic. My parents can't speak Arabic. I learned and became able to speak Arabic." His wife was also university professor of English, and she speaks English better than him. According to him, 15% of students go to a university. It's great. He said the problem was no job for them. Moroccan went to France or Spain, and married French or Spanish. He asked me if Japanese guy marry internationally, I said it's very few. When I told him about the woman who married Moroccan at Erfoud, he was very surprised. First question was what was his job. I said he ran restaurant. It seemed to make a little peace of mind. He had five children. "Do you want them to go to college?" I asked. "Yes. I'm ready to come up with the money" he said. What a happy children. "Do you want girls to go to college?" I asked, then he said,"Yes". "Don't you have an idea that woman should not work?". "There is no such a thing. Sometimes women can work better than men, for example, teachers. How about Japan?", then I said,"There are some people who have old ideas, but now changing", I said. "Morocco is also changing", he said. After 9 hours by bus, I arrived at Marrakesh at 4 o'clock. This is Marrakesh. I saw that it's somehow city. The bus terminal was also big. When I got off the bus, a guide came to me and said, "come, come, hotel is here". I had decided to stay a hotel near Jamaa el Fna, then I walked alone. The guide wanted to take me to the hotel near the terminal. He was also insistent. 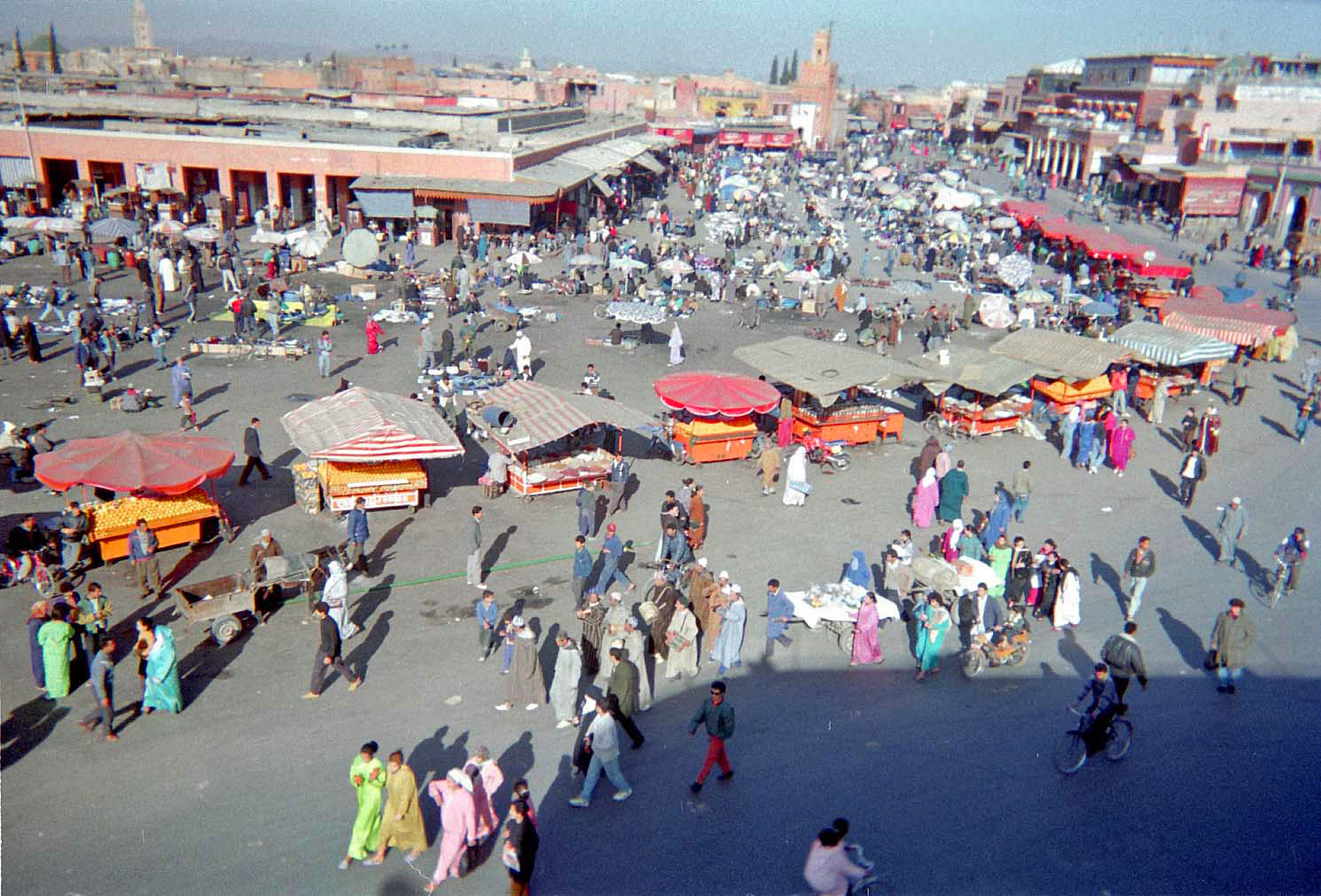 When I arrived at Jamaa el Fna, it was a time to come stalls. I rested at cafe, then I looked for a hotel. After I got the room, I backed to the Jamaa el Fna. It's very nice atmosphere. It's like an Asia. I fell in love at a glance here. Many stalls opened, mouth-watering smell is coming. Yeah, I was excited. I had Harira, first. It's 1.2DH. cheap. then I got caught a kebab stall. Because it looked so delicious. It's 10DH. Then I had a soup of something like shellfish. It was a snail. Main dish was fried fish and fries. Finishing orange juice. Very nice, it's freshly-squeezed orange juice. 3DH. 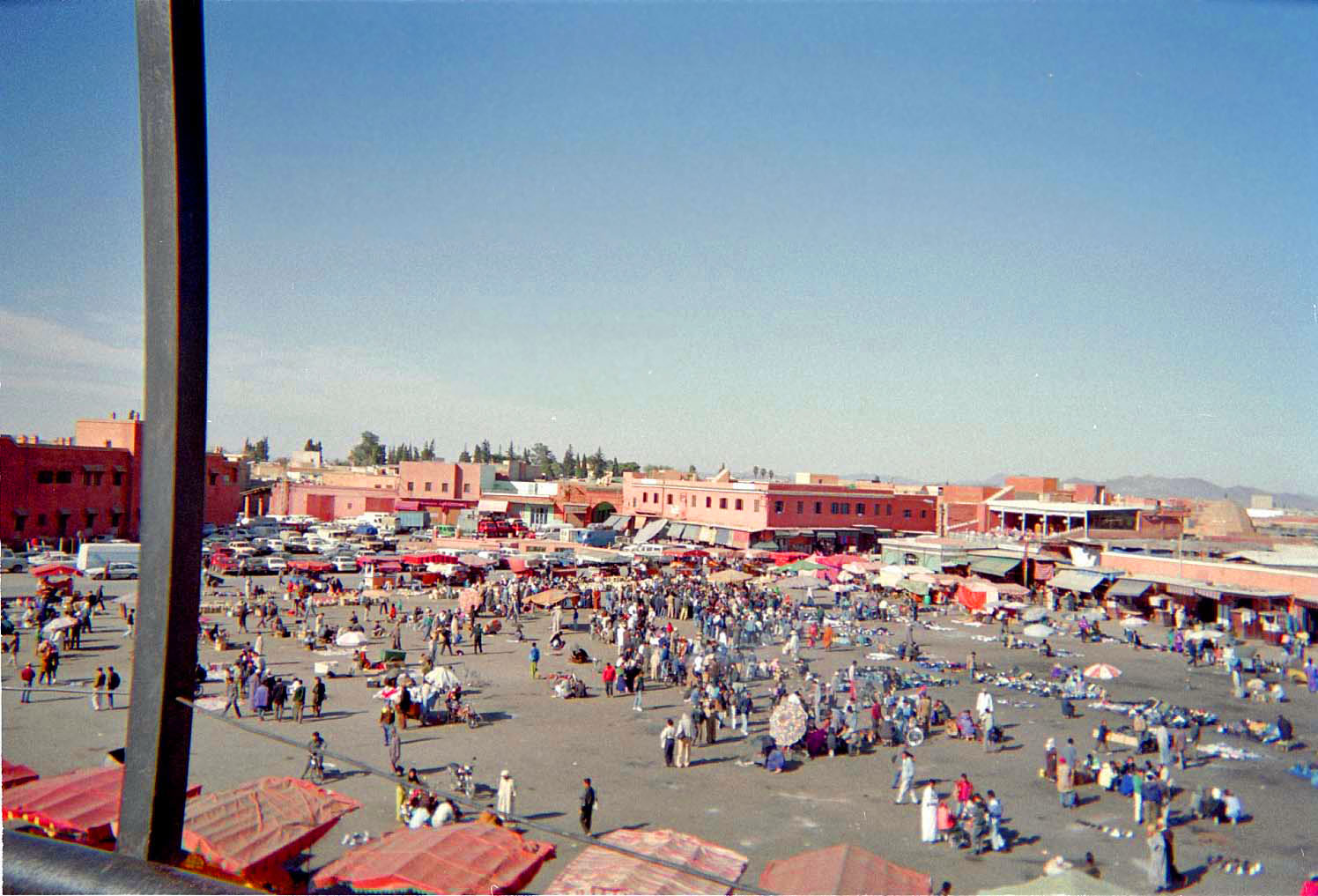 Today, I bought many things. First leather sandals, 115DH. Then Jullaba, 300DH. It might have been a little expensive. Because guy of the shop said OK easily for that price. And leather daypack, which was embroidered like a carpet. This bag was 150DH and my pouch bag, my pen, and my poncho. I had no money,so had a lunch and was looking the square from the terrace of the cafe, until the bank was open. After exchanging money, I went expedition to souq again. I bought 50g saffron, 20DH, mint tea, 10DH, three music tapes, 20DH for one. One of them was tape of the Quran. There were many music tape shops, and Moroccan gals listening to the music there. I wonder if they have favorite star. Moroccan gals frankly talked to me with smiles. 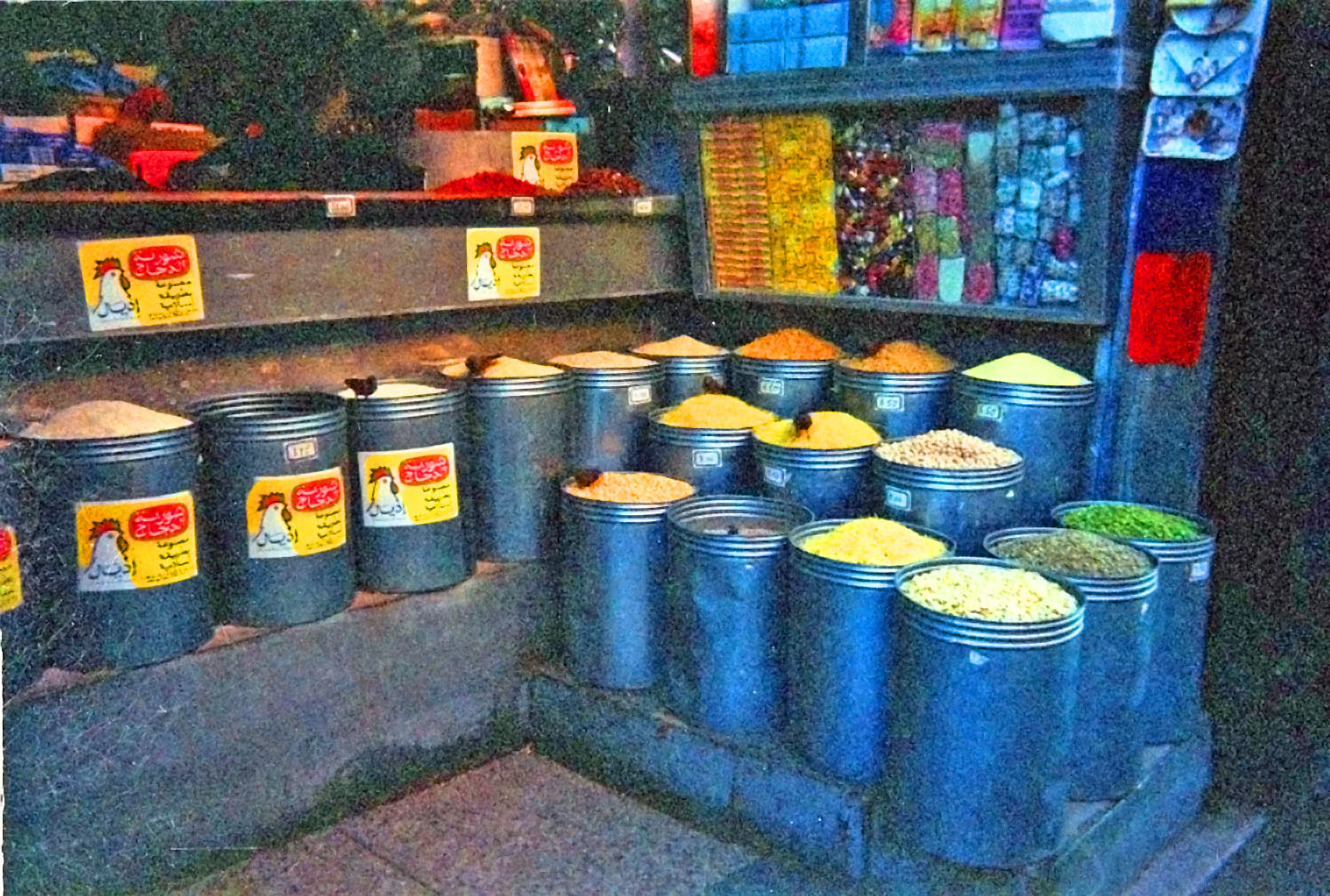 At night, I had a dinner at stalls. I had couscous today. The couscous is typical famous dish, but I don't think it's delicious. Regarding food, Moroccan is very frugal. It's not so various, such as Couscous, Tajine, Kebab, Kefta... Harira was delicious anywhere I had it.

Today I bought these things