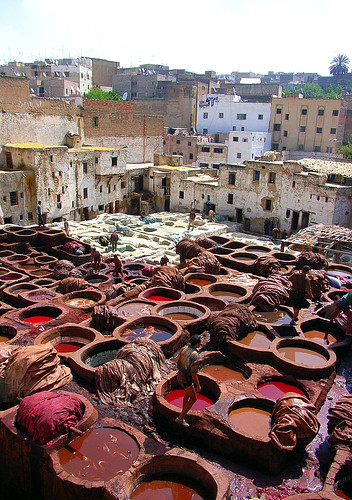 Changed 200 francs T/C at four-star hotel. It's 320DH. Finished the payment of the hotel, bought water, two hard-boiled eggs, and two yogurts, then I took a bus to Fez leaving at 11. Next destination is Fez. I didn't ask what time to arrive at Fez. I didn't care it. Inshallah. Eventually I would arrive at Fez.

To Fez, the bus across the Atlas Mountains. Going across the Atlas is very attractive because changing the scenery quickly. But I met a terrible weather. The bus leaving the Erfoud were going up the hill a little. Terrain of this area is very interesting. Fog came out, then It snowed. passing the town named Midelt, I found local passengers were talking something. Guy next tom me said the road to Fez was blocked and we had to take other way. It became more an more snow. It was heavy snow, piled up about 10 centimeters. It was snowing. The bus was driving slowly. What time we would arrived? The guy said it would be at 9:00. It would take more 10 hours. Show didn't stop at all. Outside was dark, I couldn't see anything. The bus slipped in a curve. Wow... Eventually, the snow changed to rain, then the rain stopped, and we arrived at Fez. It was 10 PM. The bus stopped at the terminal near the Medina at Old City. I wanted to stay good hotel at Fez, so I decided to go New City. It was beginning of failure. I was tired. So I took a taxi. I said "Hotel Splendid", which hotel was listed on "Arukikata". A driver said it's 30DH. It's expensive, but I said OK. Hotel Splendid was full. I was a little upset. Leaving the hotel, a guide came to me and said he could show me a hotel. He said he was an official guide, but I didn't care such a thing. He took me to the cheap hotel named ”Joan of Arc". The guide said only one room was available and it was 100DH for four persons. It's an unpleasant, but I said OK at that time because I was too tired to see other hotels. I decided to be taken to the restaurant. The guide said "It's OK. It's cheap", but took me to good restaurants. They all had no food because it's too late. I decided to leave from the guide. I said I had no money, then the guide said he could exchange. I exchanged US$15 with 110DH. He said he had only 110DH and showed me an empty wallet. I had a doubt about it, but I did. When I went to the bed, I became very angry. Fez is notorious for persistent guides.
Hotel Splendid

Leaving the hotel at 8 AM, I looked for a good hotel. I could find a three-star hotel named "MOUNIA". It was 202DH. You can stay good hotel if you pay around 200DH. The room had a heater, bathtub and flush toilet with toilet paper. I could use hot water. I took a shower and refreshed, washed shirts, then relaxed until 11 o'clock. Well, let's go walk the Medina which is said world most complicated. I tore a map page of "Arukikata" and put it in my pocket, leaved the hotel. Just after leaving the hotel, guides came to me. Fez and Tanju are notorious for persistent guides. I said "Non!", then I kept walking. I became a little tough after going through the desert in the past week. I also learned how to negotiate from Taiwanese and Greece. I was Japanese angry. Fez was a city for the first time in Morocco. It's like Paris. Very beautiful girl was walking in jeans and a sweater. I also saw few couples walking hand in hand. I found post office on the way to the Medina. I stopped walking, I wonder I wanted to send a postcard but today was holiday, then some guy came to me and said "This way, this way". "What?". It was telephone. I said "Not telephone, but stamps". "OK, here's stamps", he said and took me to shop nearby. He said "I was working for post office!". Lier. I said "give me stamps for two postcards". He said 8DH. Oh! I knew 2.7DH was enough. I said "It's wrong!", then "Sorry 6DH". I said, "No, give me four 1.35DH stamps, there, yeah, yeah". Guy of the shop couldn't help at all. Leaving the shop, the same guide came to me. he was very insistent. I ignored him then he disappeared. I was Japanese angry. Closing to the Media, other guide came to me, very insistent. "Guide, Guide, You can see everything of Medina with me" "Ah,So" "$20, OK?" "No" "Where do you want to go? $10 is OK" "..." He begun to guide me. "This is a OOO, That is a XXX". "Ah, so" "Hey, $10! OK?" "No" This guy was very insistent and unpleasant. I walked around slowly about 20 minutes. While I was walking, he clung to me and guide me. I repeated "Hmm", "Yeah", "No!". Eventually he disappeared. I was Japanese angry. I met another persistent guy. He said "I'm student.", "Come to my shop", and "10DH is OK", and guide me without permission. I met him near the tannery, he took me to the leather shop and said "Look, look". I went out from the back door of the shop, it was a place to tan the skin. I waked without permission. He said, "Come here, ah, no, not that way...". I ignored him. I was walking around and took a picture. When I went out the shop, Other guy said to me, "give me 10DH for visit fee". There is not such a thing! I said "I can't understand what you say", and ran away. 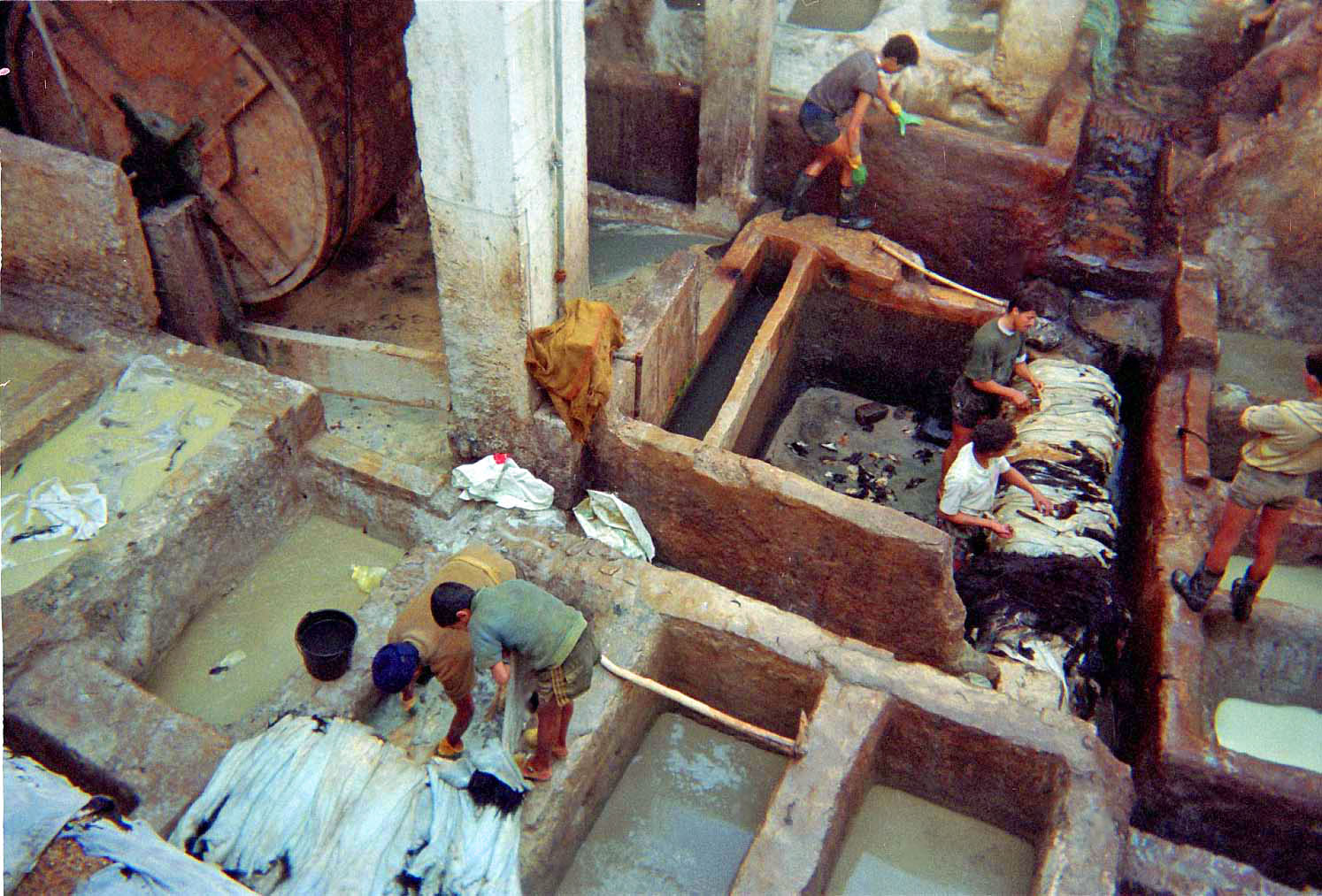 There were more guys who forced to be guided. They took me to a textile factory. In the factory, there were several machines for weaving textiles of Djellaba. The craftsman had been weaving. One guide said that I should take a picture. I wanted to take a picture, so ignored the guide and ask the craftsman, "Photo?". He wanted money. I ask another guide. He said "OK". Then one of the guides took the place of craftsman, and begun to weave. Oh... Next he must charge a fee the photo. I put my camera into the pocket, and saw other place. There was a machine which was not used. The guide said that he would take a picture of myself while weaving at the machine. He showed me pictures of Japanese who were weaving. Guides here made a fool of Japanese. They forced tourists to be guided. OK. Let them guide, but no pay. They said, "Without me, you would be lost". Yes, I know. They didn't understand if they prey on tourists, then eventually they made a loss. Why? What made them like this? Or, they were doing well? Even they're so notorious. Because why Japanese tourists visiting Fez should not pay unnecessary money. If you don't want be lost, you should hire official guide. But... If Fez would be a first town of Morocco, if I would not be learned from Europeans, I would pay the money. Because 10DH equals only 140yen, 50DH equals only 700yen. It's very cheap. From their stand point of view, they would not be able to accept visiting their place without guides. In the evening, I stayed at some cafe. Some young guy came to me and said they could guide the Medina. He showed me descriptions which Japanese tourists wrote about the guy in Japanese. It said, "He is good guy. Different from other guides, he doesn't want to money.", "This person is really good. I gave him 10DH as gratitude. It's just my gratitude, it's not mandatory.", and "I gave him a pen". Yes. It's gratitude. Japanese pay around 10DH as gratitude, like tips. But, I couldn't believe they guides tourists as a volunteer. 10DH is a pretty good money. You can eat two sandwiches, and eat five times if Harira and Bread is enough. This problem is very difficult. Europeans I met in Morocco were living in Paris, London, or Madrid, and they should have a life such a costly. But they didn't pay unnecessary money in Morocco. I know some European tourists spread money here. The price is cheap in Morocco. It's OK to pay more money for helping Moroccan life. You pay money as gratitude, as tips. I'm Japanese who thinking about it.
Hotel Mounia