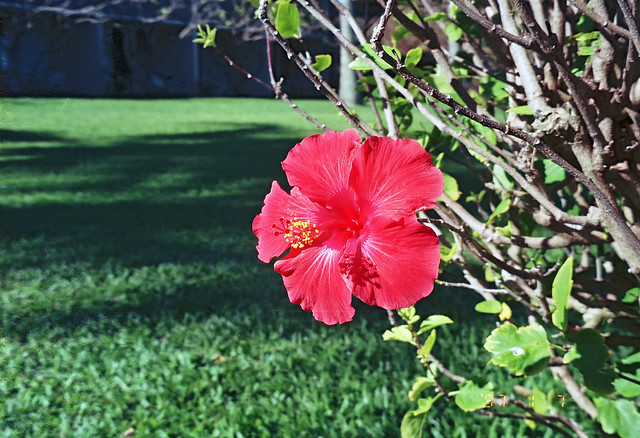 We used Green Car to go to the airport, which was very comfortable. UA check-in counter was crowded as usual. The seat was in front of the screen (21D, 21E). I drank beer so that I could sleep because I arrived at Maui at 5:00 in the morning Japan time and I had to drive. I usually don’t drink beer on the plane. However, on that day, the weather was bad and the plane was bumpy. After a meal it became worse, I couldn’t sleep and felt sick. We arrived at Honolulu at 6:30 in the morning. The next flight for Maui was 8:30. While we were waiting for the flight with drinking a cup of coffee, two planes flew to Maui. We arrived at Maui (Kahului Airport) at 9:00 and checked out a rental car at 9:20. This was the first left-hand drive. We headed first to Iao Valley. According to the guidebook, “Mark twain said its beauty is Yosemite Valley of Pacific Ocean”. “Hmm…”, but I have never been Yosemite. Walked from the parking lot, we’re looking for an Iao needle. “Which would be the one…, Oh, that is…”. It was the same as the photo 🙂 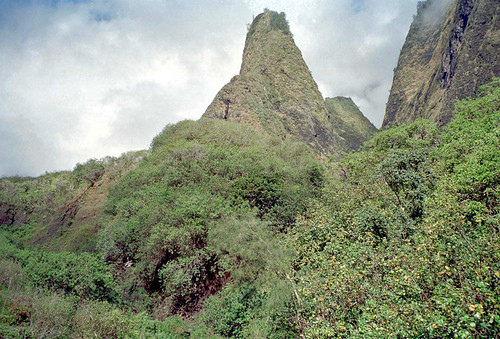 Iao Valley is quiet and comfortable with full green and river, but don’t expect too much. We headed to the west coast. After driving a while, the sea appeared. It was a great sea of dark blue color. We found “Scenic Point”, then stopped the car to see the sea. Driving further, arrived at the town of Lahaina around 11:30. Parked at a free parking lot, checked time for Whale Watching Tours. Windjammer’s next tour, which has Japanese guidance, was from 2:30, but Pacific Whale Foundation was noon, so we decided to take it. It’s $31/person. We had only 20 minutes to lunch, then took out Whopper Jr. Combo, $1.99 at near Burger King. Just before noon, we took a boat. We had to take off our shoes on the boat. There were a Japanese couple and a family with two children. The boat was out to sea, it’s pretty fast, due to the relatively small boat, I felt a little worse by shaking. The Head was noon, right was 3, back was 6, and left was 9. The guide on the roof cried “11:30!” when he found the whales, then all rushed in the direction of 11:30. Soon, we got to the first watching point, the boat slow down. After a while, the whales appeared in the direction of 1:30. Most of the people didn’t find it, some were excited to see the tail of the whales. Going further to the next point, the guide said 11:30, but I couldn’t find it. The whales started squirting, so I could confirm, but it’s too far to take a picture. First I found squirting, then saw the tail of the whales next. Suddenly, “Right!, Right!” I heard the voice, and there were two whales near the boat! I dashed to the right side of the boat. They disappeared before I took the picture. But it’s good to see the whales for a moment. The whales came again at the back of the boat. I took two pictures. Later I saw the picture that I can see two parts of the back of whales on the surface of the sea. The photo was not big deal, but it was certainly exciting. 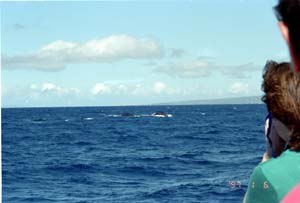 It’s time to go back. The boat sailed so fast that I felt worse. I walked around Lahaina town, then headed to Napili. I was very sleepy, took a nap until 6:00. The condo with a full kitchen, so we were planning to cook a meal. We went shopping at the supermarket. Today’s dinner was pasta, steak, and canned soup.

We went to the Haleakala volcano today. We should wake up early because the weather became bad in the afternoon. So we got up at 6:30, made sandwiches for lunch, and left the hotel at 8:00. 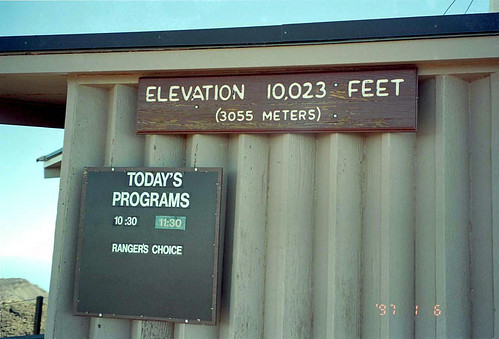 We enter the mountain road at 9 o’clock. Bicycles came down the opposite lane. It may be the downhill tour, which runs down from the summit of Haleakala by bicycle. The tour to see the sunrise at the summit costs about $110, just downhill costs about $80. We paid $4 at the entrance gate to the National Park, then headed to the summit. The ticket was valid for 7 days. On the way, going through the cloud, there is a field with rocks only, without plants. The altitude of the summit is 3000 m and more. At this height, a little hard to breathe. Inside the hut on top of the mountain, Ranger’s Talk was held. A woman talked about Haleakala. We looked at the craters of the volcano from the summit and the visitor center was a little walk down from the summit. There are 21 craters, the scene was something inspiring. In the crater, the tourists can walk through the trail. Because of never-before-seen views of rocky, I couldn’t grasp actual distance. The nearest crater seems to be very near, but actually, it is quite far. I saw people walking down the trail in the crater very small like ants. 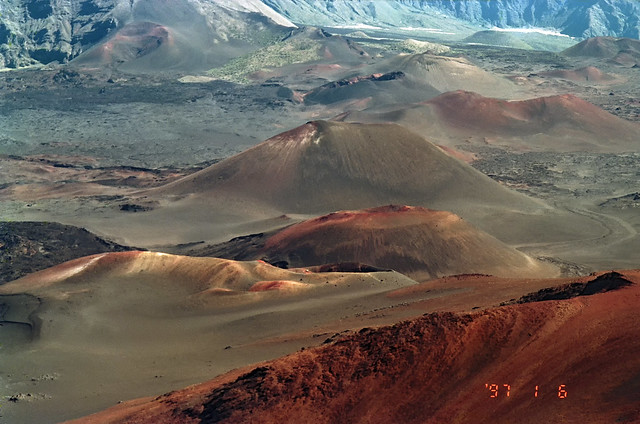 Around noon, we had lunch in the car. The outside was very cold. I wanted to go to the nearest crater where is 1 mile from here. The downhill slope was steep than I thought. Going down the hill, but it takes a long time to reach the crater. The crater is approaching, you can now see the plants called “Silver Sword”, which is only seen here and in the Himalayas. Just before reaching the crater, I was said “You’ll look nice view !” from a couple on way back, which excited me. I reached the crater. It is about 100m in diameter. I imagine when the magma was going out from here. 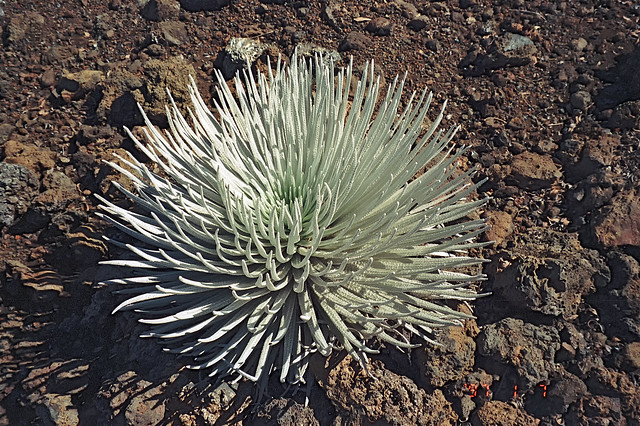 After looking while, on the way back, I was aware of it was very hard to walk, because the altitude is around 3000m. It was hard to breathe. With shallow breathing, walking slowly, or I would faint. It’s just 3000m, so incredible climbing of Everest without oxygen. Eventually, I spent two hours walking, it was in the evening when we backed to the hotel. The dinner was the same as yesterday, pasta and canned soup.
National Park Service
Haleakala downhill tour, for example,
Haleakala Bike Co.
You can get a lot of coupons at Maui.

Laying on deck chairs beside the pool until 10 o’clock. Today was shopping day. We checked out at 11, went to Whalers Village, Kaanapali Resort. Shopping and Lunch here. Going Lahaina, looking at a final view of the sea, then went to Kahului. After shopping at Kaafumanu shopping center, went to the airport. From Honolulu Airport to Waikiki, we took a taxi. There was a taxi stand near international arriving. The first taxi in the queue was a big limousine. While I thinking about what we should do, the driver of the second car said, “Taxi? take this” pointing to the limousine. I asked the driver of the limousine “Same price?”, then he said “It’s the same. You’re lucky.” I got into the limousine. It’s the first time. To Waikiki, it takes $21. I paid $24 including the tip. He said “Arigatou gozaimashita (thank you very much)” very politely. For today’s dinner, we went seafood restaurant called Monterey Mall Cannery where is in the Outrigger Waikiki on the Beach to use a 15% off coupon got from JCB. We had a combination of top sirloin steak and mahi-mahi. It was $39 for two-person. After shopping at DFS, back to the hotel. The flight next morning was 9:00. I asked where the bus was to the airport. If you book in advance you can take the bus from the front of the hotel. I booked the bus for 7:00. $6/pax.

It’s not an airport shuttle bus, but just a big van. We arrived at the airport after 30 minutes. We had breakfast at Burger King in the airport. The end.