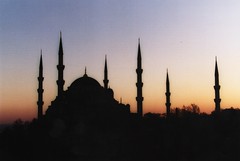 Sunset in Istanbul by Nick Leonard uploaded on 27 May 2006

The following memos are written in 1989. Turkey became a friendly country as the travel at that time was recalled when fighting against Turkey in the 2002 World Cup final tournament.

I had tried to reserve a ticket in the middle of October, but it's impossible to depart after Christmas and back before January 7. It became 120,000 yen by Aeroflot ticket December 20th - January 10th.

Aeroflot! Aeroflot... The transit of next day flight was miserable. I arrived at airport at five o'clock of the evening, but passengers must have been sitting in the dim lobby until 11 o'clock. I talked the person who was using Aeroflot many times, he said this was a usual thing and passengers must stay in the lobby until the morning when a transit hotel was a full. Hotel room is comfortable. It gives only one cup of coffee or one cup of tea at breakfast. We asked to have an another cup, but they said no. Someone got angry and threw the cut at the wall, we all greet him with applause and "Bravo".

This page describes transit at Moscow by Aeroflot (Japanese) ”旅では、自分の立場を正しく心得ないとうまくいかないものだ”
The Berlin Wall collapsed on November 9, 1989. It is the travel just after it. Ceausescu was shot dead in Romania on December 25.

The taxi from the airport to the city is 10,000 and several thousand liras with meter. The driver says 30,000. I had no problem from the city because I caught a taxi at the hotel. There seem to be a train and a bus, too. The service bus of Turkish Airlines is from 8 AM.

LOKANTA (Turkish restaurant) has no menu. You can point meals you want. All meals are around 8,000 Lira. There are McDonald's in Istanbul, its prices are the same as Japan (means expensive). There are Chinese restaurants, but it's not so good. I didn't go, but there are Japanese restaurants. Turkish cuisine are very good, but oily, I wanted other kinds of cuisine. At resort area, you can find stylish restaurants, it costs 20,000-30,000 Lira. Once I went a restaurant at Izumir. I ordered grilled fish it was 70,000 Lira.

Turkish people like tea (Chai). They drink chai very often. You can find Turkish coffee but Nescafe easier. Nescafe is expensive around 2,000 Lira. Chai is 200-500 Lira.

From Istanbul to Cappadocia, It takes 13 hours and 25,000 Lira. For destinations which take 4-5 hours, it takes 4,000-5,000 Lira. A quality of service and cleanness of buses are very different from bus companies. Most of bus companies uses Mercedes-Benz.

When I took a bus in Istanbul, I didn't know which bus was a one I should have take, I asked to a person there, she took me to a right bus and asked a driver something. When I got off, some passenger told me a bus stop I should have get off.

When I walked around in Konya, a young man talked me, "I'm a student, I like Japanese. Do you look for a hotel?".

Then, He showed me a hotel. I didn't like first one, then he showed another hotel. After that, he talked me, "How about having tea?". He seemed to want to talk to Japanese in English.

In Konya, I didn't know which dolmus (share taxi) I should take, I asked a person who was waiting a dolmus. He took me to a dolmus and paid fee for me. At a pension in Antalya, an owner and his friend guided me to walk around at night, and played chess. They also said they like Japanese.

Of course, not all people were kind. Some person asked me some money for his guide, other person showed me a ticket counter at bus station and took me to the bus, and finally wanted some money.

And peddlers were very annoying. At Blue mosque, Istanbul, some guy talked me and took me to his carpet shop.

I didn't meet Japanese so much. Many Japanese came to Turkey by packaged group tours. I met few Japanese who traveled alone, including women. I met a Japanese group at a very good hotel in Izumir.

My ticket to Japan was from Roma. I went to Roma from Istanbul. I bought a ticket at Istanbul, it costed 680,000 Lira. It's comfortable flight by Turkish Airline.

Roma is a big city and looked smarter than noisy Istanbul. Blue mosque and Hagia Sophia was good, but Churches in Roma was great.

Italian were very stylish. Fashion sense was very different. Italian ladies looked very beautiful, because in Turkey I didn't see women except at banks and boutiques.